Rewards, records part of the fun at Queen’s Cup 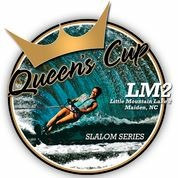 The first two years of the SportsInsurance.com Queen’s Cup were very rewarding for the women slalom skiers who traveled to Little Mountain Lakes near Charlotte, N.C.

Rewarding in terms of self-esteem, comradery, accomplishment and, well, awards! As in $10,000 and more in cash and prizes.

The third annual Queen’s Cup, presented by SportsInsurance.com and Nautique dealer Race City Marine of Mooresville, N.C., is scheduled for Sept. 15-16 at Little Mountain, and the rewards -- spiritual and material -- will again make it an enviable event.

"Oh my gosh it's amazing!” said Maureen Mosteller, who traveled from Alberta, Canada for the inaugural Queen’s Cup. “I hope this continues to grow. It's such a great event! The people, the quality of the skiers -- just so much fun! Just really cool!"

The Queen’s Cup was recently recognized by the Women’s Sports Foundation, which once counted among its board of trustees the legendary three-event skier Camille Duvall Hero, a member of the USA Water Ski Hall of Fame. The WSF is onboard as a major sponsor of the Queen’s Cup.

The Queen’s Cup plays out on a made-for-slalom lake that has produced world and national records by Nate Smith, Jeff Rodgers and others. Joy Kelley (Women 6) and Cyndi Benzel (Women 7) took home U.S. records from the 2017 Queen’s Cup. In 2016, Leeza Harrison also broke the Women 7 record, and Mosteller and Rhonda Powell played tug-of-war with the Women 5 Canadian record as both topped the national mark in qualifying rounds.

This year’s event promises more of the same in terms of quality and quantity. Each skier is guaranteed two qualifying rounds on Saturday, with the top 16 advancing to Sunday’s head-to-head finals. There is also a way to win a prize without advancing, as the qualifying rounds will use a handicapped scoring system that allows a skier of any skill level to win by beating her average -- even if it’s her first tournament.

The top 16 and prize winners will be announced at the Saturday night on-site banquet, which will also feature ageless wonder Joy Kelley as the keynote speaker.

Women 30 and older (who have not placed in top 7 of an Elite points event in the past 2 years excluding Worlds) are eligible to enter, and all compete on equal footing, as boat speeds are not a factor. Women whose maximum boat speed is 30, 32 or 34 are scored equally for each line length.

To enter, go to usawaterski.org for tournament information, or contact tournament director Jeff Gilbert at .