Lake-life is your best life! 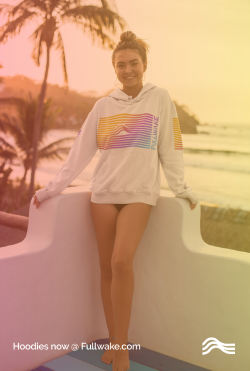 Introducing Fullwake. Your no-nonsense approach to lake-life apparel and style. Fullwake is the official apparel of lake-life. Fullwake LLC & Fullwake.com were created and arrived online in April 2020. Fullwake currently offers a wide array of apparel products consisting of mens, womens, youth and kids sizes. Some of the most popular categories include t-shirts, hoodies, tank-tops, swimwear, hats, and Aquawear. New items arrive online daily.

Fullwake was created by owner Michael Cawcutt in April 2020. Cawcutt, who’s no stranger to water, grew up in Northern Minnesota enjoying all the splendid gifts that lake-life has to offer. Fullwake was created from the very memories he and his wife, Kelly, had with their families while on the water. Some of Michael’s earliest childhood memories are those of water—favorites including his Grandma’s cabin in Northern Wisconsin where he learned how to water-ski at the age of 6. Others include that one time when his family, sleeping aboard their 24-ft Searay Sundancer, started to drift in the middle of an evening thunderstorm on Lake Superior due to the anchor losing its hold. Fullwake, whose mantra of Live. Love. Lake-life is anything but carefree, is deeply rooted in a passion for boating, water, and lake-life.

April 10, 2020, Fullwake.com opened its “doors'' to a bounty of friends, families, and former strangers who are now part of the Fullwake family. In its first 30 days that Fullwake has been open, it’s quickly grown it’s social media presence to 5000 combined followers and has amassed several hundred unique visits a day.

Fullwake’s goal is simple. Treat everyone you meet like you’re on the water. Fullwake proclaims that being on the water or lake-life is something you can't explain—one experiences something magical once you step aboard. Fullwake hopes to capture some of that magic through their passion for great design, helping people, and coming together. Lake-life isn’t a tangible thing that can be shared—it’s an experience. It isn’t a requirement or status that comes along with owning a boat or living on the water. It’s a frame of mind, an escape—a lifestyle. It doesn’t matter where you're going—but what matters are the memories you make along the way. Every Fullwake logo serves as a reminder of the lake-life experience to the growing community of passionate people who live and love lake-life daily.

Fullwake is committed to making positive change in the world and giving back to those in need. They’re addressing water issues directly affecting people, their surroundings or the inability to have clean, sustainable water. From lake cleanups, zebra mussels to portable drinking water—Fullwake has a plan. Currently, Fullwake is partnering with Generosity.org ( their work has helped 500,000 people in 20 countries get access to clean water) to provide clean drinking water for those without it. A percentage of every purchase will be donated to help provide clean drinking water.

Fullwake is owned and operated by Michael Cawcutt. However, it’s a family affair with copywriting, feedback, modeling apparel and snapping a few pics of products “In the wild”. “The brand is everything,” Cawcutt says. Everything about Fullwake—from the logo to the apparel—are influenced by all that lake-life has to offer. From the rich colors plucked from a sunrise or sunset to the lush greens, purples, and blues of the water. The wave crest of the logo forms the letters “F” & “W”. The three lines represent boating, water and lake-life and were the influence for Live. Love. Lake-life.

“The brand is what attracts people, but the bond for lake-life is what ties us together,” Michael says. Cawcutt continues to explain how quickly he realized the brand connected with people, “However it’s no longer mine—you see once it was created, I gave it away to the community to let them foster it, see it flourish and grow,” he further adds. Michael, whose background is design, said, “the best thing about Fullwake is the people that it attracts and the amazing growing community—the Fullwake family.”

This email address is being protected from spambots. You need JavaScript enabled to view it.

See what Fullwake is up to via their social media footprint at: