A Different Perspective on the Edge Change 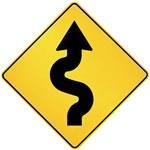