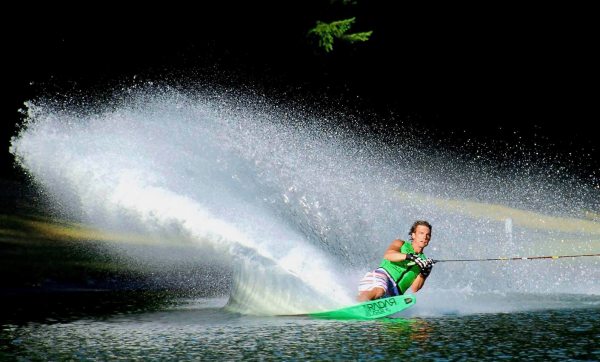 @Kavan  asks "When conditions are less than ideal and it's windy, what are some of the thoughts or adjustments you make to your skiing? In both cross winds and head tail."

This is a great question and worthy of a winning title!  I see a lot of skiers struggle when the conditions become less than ideal and feel that most of the problems arise from not having the right game plan.  Here are my thoughts on each of the different wind conditions and how to take the most advantage of them.

I'd like to start by stating the ideal edge change location because it will be referenced as the baseline for each of the wind condition variables. If there is no wind and the skier is able to generate sufficient speed in their cut, the centerline or directly behind the boat is the ideal place to have the ski transitioning from edge to edge. Meaning, that the skier has made their hardest cut before this point and has released the ski from it's cutting edge to its turning edge. As the ski transitions from edge to edge, there is a moment where the ski is flat. As stated above, this is where your ski would be at at the centerline if you had ideal line and speed. The reason most skiers like a head wind is that this transition happens later for them and thus they carry extra speed with less than ideal direction into the buoy. A head wind helps to make the later transition feel correct and for that condition, is the correct change.
Head Wind - A headwind adds considerable drag to the body and robs the skier of the very speed they worked so hard to establish. The correction to stay on the ideal line is to focus on a slightly later edge change than centerline and make sure to keep the body moving outward after the edge change. To keep moving outward, the skier must not over load the line so they do not get pulled to the inside after the edge change and keep the handle close to the body in the preturn.  For the gate pull out, I delay my starting point to edge out to take into account the added drag in the glide that I will incur. My glide will be shorter, but I will be at the appropriate speed/width to turn in due to the head wind.
Tail Wind - A tailwind reduces drag to the body and allows the skier maintain more speed after the centerline. The correction to stay on the ideal line is to focus on a slightly earlier edge change than centerline and focus on maintaining line pressure out toward the buoy line. The biggest problem I see with skiers in a tail wind is their fear of speed.  They tend to correct by going easier in their cut. This seems logical except that by going easier, the edge change is delayed past centerline and without the head wind, there is insufficient drag to slow the skier down before the turn.  The end result is slack, a delayed acceleration out of the buoy, and another late edge change into the following buoy (this is also called "chasing" and does not feel good). Focus on a strong cut that ends earlier than centerline and stay connected to the handle in the preturn to maintain ideal direction into the buoy.  For the gates, I start my pull out slightly earlier than normal and set an aggressive edge that I can come up out of slightly earlier than normal.  Then I focus on maintaining line tension out to the apex of my glide. Another big problem I see skiers do is they pull out early and easy in a tail wind which basically sets up the "chasing" effect mentioned above.
Cross Wind - a cross wind is both a head wind and tail wind in the same pass. When going into the cross wind, the skier must focus on the headwind strategy and then at the completion of that turn, must shift focus to tail wind strategy. This condition is probably the toughest overall and will show the skier how well they have mastered each of the headwind and tail wind strategies. I have been lucky throughout the years and have had the opportunity to practice in each of these conditions extensively. As a rule when I was training at a facility that had multiple lakes, I chose the windier lake 85% of the time. My thinking was that everyone can ski at their top level when it is calm, but the ones who can ski with it windy would separate themselves from the pack. My one word of caution is to evaluate conditions for safety. When the water gets too rough, you are putting yourself at greater risk of falling and thus injury. I have been injured in a strong headwind where when I edge changed, the ski blew away from me more than I expected and I landed on my ear at top speed. Ouch. I have also been injured in a strong crosswind where the waves being blown cross course caused my ski to skip out right at apex. Another ouch. Ski all conditions so that you are experienced for anything that is thrown at you at your next big tournament!

@TravisNW  asks "It seems an important factor of running short line passes, 38 and beyond, is to establish width sooner. A new concept I've recently been introduced to goes on to say that instead of trying to maintain max angle after the wakes one should ski directly at the Bouy. This goes against a lot of what people have been trying to do for so long but actually makes great sense because a shorter path will save time and space. Thoughts, agree, disagree? I can explain more but have a feeling you might already be with me here."

@TravisNW you are right on the mark with this question. Another worthy winner! This answer probably won't be that long, but the concept is something every skier must wrap their head around to be successful at their shortest passes, especially 38, 39, 41, & 43 off.  The biggest hang up is the desire of the skier to get wide/early for the buoy because they know from past results, their turns are better when they get more time to set it up. There is a fundamental flaw with this approach as the rope starts to get shorter than the buoy line and that is the handle can't physically go that early/wide. The only way to understand this is to set up a pylon in your yard and measure a buoy out at 90 degrees from the pylon at its exact recommended width (Jamie Beauchesne taught me this at least 5 years ago!).  Then hook up your rope to the pylon and walk the path of the tight rope for each line length. At line lengths 32 off and longer, there is plenty of width/space capable in the preturn, but as the rope is pulled in shorter, the ideal handle path becomes much later and narrower.  There is a flaw to this test in that in actual skiing, the pylon is moving down the course, but when the line gets crazy short (43 off), the skier will have to be at 90 degrees just to get around the buoy when at full extension. This validates the test in my eyes. So back to the concept at hand, at 43off, your ski will not get to buoy width until just a few feet before you reach 90 degrees to the boat and are fully extended.  Most skiers never will get to 43off but can progress their skiing by recognizing that they have a flawed approach to skiing at whatever line length they are stuck at.  What you hear these days is about "tight rope" skiing and the basis for this style skiing is to be on the ideal path where the line stays tight always (like when we set up the pylon and buoy in our yard as recommended above).  Yes some of you will say that the current record holder skies with a loose line sometimes. I recognize this and that just shows that we do not need to be perfect to run 2.5 @ 43. BUT, to run the next line lengths, a tight line will be necessary.  If this is what it takes to ski the best, we all should be striving to do the same.  Good luck in your journey.  There is a lot of information out there on how to ski with a tight line, but I think you will learn a tremendous amount from the dry land test mentioned above.