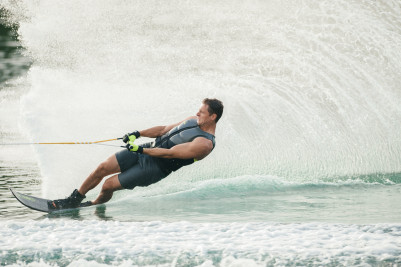 We saw the merit for wider skis. It provided better performance and heightened improvement in the wider population of course goers. Doug Cannon has engineered Connelly products for 25 years, and along with a team of Connelly masterminds, he helped create the most efficient, effortless and predictable 34 mph ski on the market. Say hello to the Connelly Carbon V.

Forgiving, light and snappy, easily maneuverable, responsive. These are just a few of the qualities that set this buoy slayer apart from the pack.

Doug and the Connelly team originally bred the Carbon V from the Prophecy, the precursor to the GT. Unlike many other ski companies, Connelly created a ride that added more than just uniform width. They fashioned the Carbon V with a wider fore body to generate stabilization and speed as well as a slimmer tail for quicker edge changes. As a result, the Carbon V boasts aggressive turns without blowing out the tail and stays solid through the wakes.

According to Connelly elite slalomer Seth Stisher, the Carbon V is prime for people who are working their way to their max speed and need support at longer line lengths and slower speeds. It’s a great stepping stone for learning the course for the first time and honing clean, basic, efficient moves, he says.

Because the Carbon V was constructed with the same geometry (bevels, sidewall, tunnel) as the GT, skiers are able to work on the same principles as someone who is focusing on short line slaloming.

“Our top end skis were always designed to perform their best at a top level,” Doug says. “Skiing on them at slower speeds leaves some performance on the table. We wanted to make an extremely high performing ski that worked to its full potential at slower speeds (32-34 mph).”

Thus, the Carbon V was fabricated with efficiency in mind, so skiers could accomplish big goals with less effort.

If you are dreaming of 38 off but are still working on the yellow loop, we think the Carbon V is your answer to prayer.