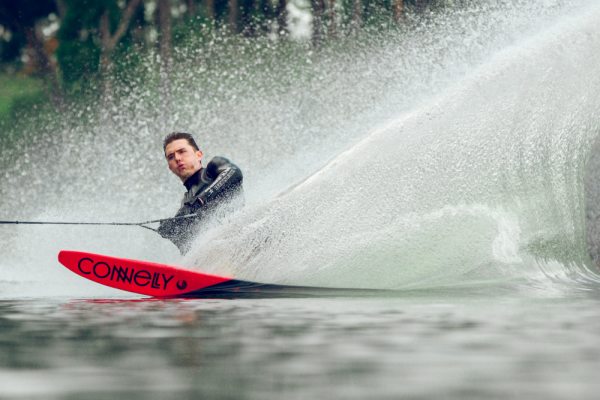 VersaTail (patent pending) is the first and only interchangeable tail system. In the past, subtle tweaks in ski geometry and construction are all that has differentiated the myriad of options available. This revolutionary design gives skiers the ability to alter the geometry and fine tune the ski to their preferences. Changing these tail blocks will alter the flow of water off the tail of the ski, taking a step beyond the standard fin and binding position adjustments. If you find yourself in a different water temperature simply try another shape to get your tail higher or lower in the water.

Stock - Designed to offer a balanced tail depth through the turn and across the wake.

Square - A square tail shape that adds lift, support, and provides a clean release of water for speed.

Round - The round tail lets the ski sit deeper in the water into the turn, adding control at higher speeds for quicker turns and reduced tail blow out

Round to Square - Allows the ski to ride deeper in the water on left turns and provides more tip pressure on right hand turns. This may benefit the skier on their onside and offside turns depending on their strength and style.

Square to Round - Allows the ski to ride deeper in the water on right turns and provides more tip pressure on left hand turns. This may benefit the skier on their onside and offside turns depending on their strength and style.

The 5th annual Herb’s Cup by Radar Skis took place August 4th and 5th on the famed waters of Radar Lake, in Woodinville, WA. The event is held to honor Herb O’Brien, highlighting his competitive spirit, while capturing the camaraderie of the sport. Paying homage to his creative drive, Herb’s Cup utilizes an exciting and unique lightning round format. Each skier leaves the dock armed with six and a half minutes to post their top obtainable score. Skip a pass, spin the boat and shorten on the fly, do whatever it takes to run the most buoys possible. And, as encouragement to make the most of your shot clock, a possible tie would be settled by the most cumulative rounded buoys at your shortest pass.

Starting at 32’ off, Jason McClintock would skip 35’ and head straight through 38’ and 39’ off. Clearing each pass cleanly, Jason would have three shots at 41’ off, finishing with two buoys, and 3rd place. Following Jason’s example, Jamie Calhoun would employ the same strategy. After a hiccup at 38’ off, going down at two-ball, Jamie would opt up to 39’ off, running it on his way to 3 at 41’ off and a second place finish. Defending Champion Corey Vaugn let his experience shine, opting to start at 35’ off, then moving directly to 39’ off on his second pass. With more than four minutes left on his clock, Corey would regain his Herb’s Cup title rounding 3 at 41’ off and accumulating 8 buoys total on the line length.

The boot you’ve been dreaming about is coming this fall! 2022 Vapor boot will rewrite the rules when it comes to waterski footwear. If you’re going to be at Waterski Nationals swing by our booth for a sneak peek.

Morilee US Open of Water Skiing 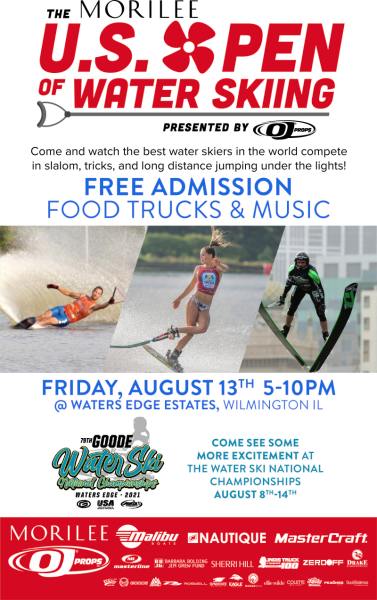 The American Water Ski Association's National Junior Development Committee is holding an online auction in conjunction with the 79th GOODE Water Ski National Championships. The auction runs Aug. 4-12 and features items from GOODE, Connelly, D3, HO, Radar, Coble Ski School, Ski Fluid, Travers Water Ski School, Corey Vaughn Water Ski Coach (Peace Love and Water Skiing), USA Water Ski & Wake Sports, and more.  Click here to bid on items and support national junior development. The funds raised from this auction will benefit the programs and awards of AWSA National Junior Development. This includes the National Junior Team, All-Stars, National and Most Improved Awards, and the Junior Banquet at Nationals. The auction runs from noon (CDT) on Aug. 4 until 8:00 p.m. (CDT) on Aug. 12. It is online  only this year.The American Water Ski Association’s Junior Development Program is a nationwide program for water ski athletes of all levels under the age of 18. The goals of the program are to attract new junior skiers, promote junior skiers and provide junior skiers with opportunities for assistance in improving their skiing skills. These goals are accomplished through various clinics and activities. Some clinics are for the beginner skier who wants to become a competitive skier, while other clinics are designed for the skiers who want to perfect their skiing expertise to reach a higher level of competitive skiing. The program also provides awards to junior skiers for their participation, as well as news articles in The Water Skier, which promotes junior skiers’ accomplishments.The Junior Development Program has different teams for the many levels of skiing. Each of the five regions supports a team and from these teams, an All-Star Team is chosen each year for competition at the GOODE Water Ski National Championships. There also is a National Junior Team, which is chosen through the skier’s placement on the National Rankings List.

VaporThe Vapor reigns supreme when it comes to feel on the water. For 2022, we created a ski that feels truly automatic in the turns. Simply ride the line out to apex, release a hand, turn, and off you go to the other side. The ski can be turned from any position and has led skiers to say there’s no sweet spot, rather an infinite area to make incredibly tight turns. More side-to-side power combined with these automatic turns yields a softer, more flowy overall feel than any ski we’ve produced to date. The balance this ski creates allows a skier to make mistakes yet still move the ski underneath them to maintain speed and direction. This entirely new shape for 2022 will have you running earlier lines than you ever imagined; just rip and repeat.ShapeThe wide spot on the ski has moved forward and width has been added from the middle of the ski through the tip. This gives the ski a more tip to tail taper and more support through the front part of the ski. The increase in taper presents the ski with a slightly more tip-up riding attitude and allows the ski to pull through the turn in a more connected, powerful way. The result is less body movement needed to get tight radius turns. The new ski also has slightly less volume in the tail. By reducing this surface area, the tail of the ski is able to smear outward while also staying planted in the water. Ultimately, the updates in shape help it to ride much closer to the ideal line for any given speed and rope length.RockerThe tip rocker on the new Vapor starts just after the wide spot. This relieves tip pressure and increases forgiveness, allowing a skier to have a bigger platform to stand on coming into the turn. This also helps keep the ski keep moving outbound in the transition and makes the ski incredibly more predictable in the turns it creates. Moving back from the wide spot, the rocker lines are all new. These new lines create a ski with increased tail rocker which softens the way the ski rotates or carves through the turn. The result is a feeling of increased angle from a wider place with an instant acceleration.ConcaveThe additional concave depth running throughout the bottom of the ski is one of the most noticeable differences in this new shape. This channels more water directionally from tip to tail, resulting in significantly more side-to-side drive and holding power. More drive and hold allow a skier to be faster as they near centerline which results in a more up-course path. Another result from an increased concave is increased pressure on the bevels, allowing the ski to feel extremely connected to the water. This gives a skier the freedom to control the path of the ski with more ease.BevelsThe front of the ski carries a sharper, more angular bevel design to harness the increased water flow from the new concave design. This gives the skier more ability to feel how the water interacts with the tip of the ski to create sharper, more predictable turns. In the tail of the ski, the bevel is softened, allowing the water to wrap around the bevel easier. The tip of the ski pulls harder through the turn while at the same time, the tail is able to smear while staying planted in the water. This feathered approach makes the turns feel much more natural and less forced.ThicknessSidewall height carries constant to provide balance for the increased lift created by adding width. In an effort to keep the ski nimble, sidewall thickness is reduced to produce the connected, tight turning radius of the ski.Edge AngleThe Vapor width allows the ski to achieve maximum edge angle both in the turn and while cutting. This width sets the precedent in our line as the pinnacle of performance both in the course and while free skiing.