COVINGTON, LA – SKI RANCH - It was only hours after, World Record Holder and Current season point leader, Chris Parrish, had signed a sponsorship agreement with GOODE Skis, that he tied the Men’s World Record that he set over 5 years ago, by running 1-1/2 buoys at 43′ off (9.75m).
In addition to the agreement of GOODE Skis becoming Parrish’s primary ski and equipment sponsor, GOODE has also become a lead sponsor of the Chris Parrish Academy, in Daytona Beach, FL .
“After a ten year search to find a ski that could catapult me beyond my current record and level it appears that I  finally have  found the “Ski “, as well as a Company that is devoted to our sport like no other!”, said Chris Parrish. “Working closely with Dave Goode for just a while, I have already seen the support he brings to the lake and to his athletes everyday.”, Parrish continues.
“I am proud and honored to join World Champion Thomas Degasperi, Nick Parsons, Thomas Moore and World Record Holders; Regina Jaquess, Karina Nowlan, Kristi Overton-Johnson, and so many more, as the newest  member of the Team GOODE.”, Parrish continues. “Additionally, Dave and GOODE’s support of my newly launched SKI and SURF Academy, will help develop the next generation of skiers reach their full potentials. We will sell, train and teach all levels of skiers. With GOODE products available in our proshop, our skiers will enjoy the best of the best. To say I am excited would be a understatement! I intend to use this partnership to attain the level of consistency and improvement that will secure my position as the World’s #1 slalom skier for many years to come!”, concludes Parrish.
“It was an amazing day!”, said Dave Goode , President and Founder of GOODE Ski Technologies. “This morning Chris joined Team GOODE and hours later, from the boat, I watched him tie the World Record!”, continues Goode. “While sitting in the water, after Chris ran a beautiful 39-1/2’ off, he told the boat crew a story that he had just received a phone call from Lyman Hardy, who told him that Regina Jaquess had just tied the Women’s World Record of 1 buoy @ 41’ off (10.25m). I think this helped spur Chris on!”, continues GOODE.
“I am excited for the water ski world to see what Chris Parrish and GOODE can do together! This was only day one!”, concludes Goode.
Both Chris Parrish and Regina tied their own World Records today by skiing on stock GOODE 9900SL skis.

COVINGTON, LA – SKI RANCH - It was only hours after, World Record Holder and Current season point leader, Chris Parrish, had signed a sponsorship agreement with GOODE Skis, that he tied the Men’s World Record that he set over 5 years ago, by running 1-1/2 buoys at 43′ off (9.75m).

In addition to the agreement of GOODE Skis becoming Parrish’s primary ski and equipment sponsor, GOODE has also become a lead sponsor of the Chris Parrish Academy, in Daytona Beach, FL .

Take your Slalom training to the next level with focused mental practice.
Use the power of your mind to change and improve your slalom technique.
Improve your skiing faster and easier through Visualization Training...

This West Coast Slalom Visualization Training is a natural next step to Mike Suyderhoud’s ground breaking West Coast Slalom Advanced DVD. This training features the smooth and fluid West Coast Slalom technique of Terry Winter as a model. The DVD is designed to be a regular part of your weekly training regimen. Based on the psychological concept of modeling and incorporating the Shortcut Method visualization training, the DVD will help you improve your technique through neuromuscular patterning. By following the simple, yet effective outline for focused mental practice your body’s own mechanism for creating movement will help you change and improve your slalom technique. Listening to your favorite music while viewing the visualization sequences makes this an enjoyable process. It also creates an auditory link between the images on the DVD and the music.

During the summer of 2009, Todd Leach conducted a survey of slalom skiers about their preferences in settings for the Zero Off speed control system. The survey asked skiers about a variety of aspects of their skiing style and situations to see if any correlations could be found in terms of preferences. The survey was advertised on several internet discussion boards and forums related to slalom skiing. Here are the results. 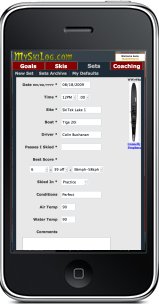