Fresh on the heels of pulling the World Wakesurfing Championships, Centurion took another bold step in introducing a new 3 event boat, the Carbon Pro. Fusing aerospace carbon construction in a vacuum technology process, the new Carbon Pro is as strong and light as it is strikingly beautiful. The actual carbon fiber construction is completely visible and forms the graphic in the side panel and deck. It's a echnology and performance story that truly separates Centurion from the pack. Powered by PCM's state of the art power system, the Carbon Pro is expected to set new standards in performance and skiability. Developed with the input of some of the best minds and talent in the industry, there's no question that the net result is on target. Early results onfirm that the fresh thinking, a Centurion hallmark, is satisfying an anxious market. www.centurionboats.com • 209-384-0255

Brent: Horton wants to know, is Adam Cord the funniest looking engineer in the history of O'Brien?
Andy: All engineers are funny looking.  Adam is VERY good at the engineer code for " I don't know about that yet", which is HMMMMM!!!

Brent:Have you ever skied behind a truck or horse?  Andy:
Andy: I love lots of horsepower!

Brent:Do you get spray leg? If so, what do you do about it?
Andy:Yes.  I don't ski enough to get it toughened up anymore.  I tough it out. I WILL NOT WEAR A SPRAY LEG.  Patrice Martin wore a spray leg!!!

Brent: Have you ever gotten highlights in your hair?
Andy: The older I get, the more I have.  They are a nice shade of grey.

Brent: Is it true that O'Brien skis make the best spray?
Andy: Of course, especially when I was 219 lbs!!!

FOR MOST people, 70th birthday celebrations are quite a muted affair.

However, for one Gloucester pensioner, a quick spin around a lake near Cirencester on water skis sounded a much better option.

Super-fit Kevan Price, of Hempsted Lane in Gloucester, took to the water alongside two generations of his family.

The retired surveyor, who will be 70 on September 22, said: "It's great fun. Physically it's not too hard but I do need a longer rest in the boat before going out again."

ST. LOUIS — Canada won the under-17 division at the Can Am water-skiing championships Sunday and nearly upset the U.S. in the under-21 class.

The under-17 team of Taryn Grant of Winnipeg, Chantal Singer of Toronto, Valerie Grenier of St. Isidore, Que., and Jaret Bull of North Bay, Ont., compiled 7,416 points while the U.S. earned 6,922."This tournament has always been a great introduction for our skiers to international competition," said Canadian coach Steve Bush. "The U.S. has the most powerful junior program in the world and to beat their top squad was a thrill for our kids."

SEGRATE, Italy - Pierre Plouffe of Mont-Tremblant, Que., won the gold medal in tricks and overall and added a bronze in jump in the 55-and-over division at the world masters water-skiing championships.

Plouffe, the Canadian coach of the year in 1988 and a member of the Quebec Sports Hall of Fame, scored 808.70 points in trick and 2,525.27 points in the overall standings to finish more than 400 points ahead of runner-up Ham Wallace of the U.S.

Plouffe soared 36.5 metres in jump. Ham took the gold at 38.5, while Wolfgang Senge of Germany was second.

Todd Johnson of Calgary added a victory for Canada in the 35-and-over slalom event. Johnson Drew Ross of Belleville, Ont., was sixth.

David Miller of Vancouver took silver in the 45-and-over slalom behind gold medallist Chet Raley of the U.S.

POLK CITY, Fla. – The U.S. 35+ Water Ski Team won the overall team gold medal and 17 U.S. water ski athletes combined to win 30 individual medals in respective events at the 2010 World 35+ Water Ski Championships, Sept. 7-11, in Segrate, Italy. The United States tallied 10,283.05 points in winning the gold medal at the biennial event. Great Britain earned the silver medal with 8,788.28 points and Germany earned the bronze medal with 8,335.69 points.
Athletes and teams from 34 countries competed in the five-day event as the world team title and world individual titles in slalom, tricks, jumping and overall were at stake.

A 22-year-old man was arrested following the death of young girl who was injured in an accident at a water skiing centre near London.

Police said the 11-year-old died yesterday at West Middlesex Hospital after she was seriously hurt at the Princes Club in Bedfont, about 29km west of London.

It was understood that the girl, named by the club as Marie-Simone Cronje, was on an inflatable and being towed by a boat when she fell off and was struck by the same vessel, Sky News said.

"Princes Sporting Club and everyone associated with it is devastated by the accident. At this terrible time, our thoughts and deepest sympathies are with Marie-Simone Cronje's family and friends," the centre said in a statement.

An autopsy will be carried out, a spokesman for London's Metropolitan Police said

By Katie Cassidy of Sky News in London

Spy photos of the Radar 2011 skis from Surf Expo 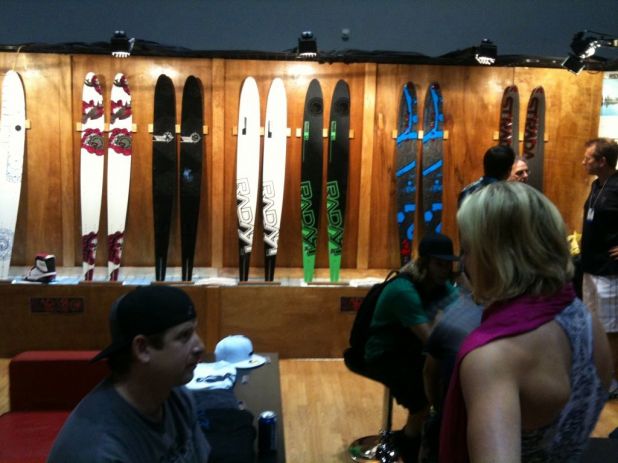 More than thirty years after The Fonz' infamous water ski trick on Happy Days, the phrase "jump the shark" is among the most dreaded to hear in the TV industry.

But back in 1977, series writers including Fred Fox Jr. simply thought the stunt would be a good way to utilize actor Henry Winkler's real-life water ski skills.

Although Fox doesn't remember who specifically penned the moment, "what I definitely remember is that no one protested vehemently; not one of us said, 'Fonzie, jump a shark? Are you out of your mind,'" he wrote in The Los Angeles Times.

The moment has since gone on to join the pop cultural zeitgeist -- and put a name to some of TV's worst moments (see Felicity's haircut and Roseanne's lottery win ). Fox still contends Happy Days was far from past its prime when The Fonz jumped the shark.

"All successful shows eventually start to decline, but this was not Happy Days' time. Consider: It was the 91st episode and the fifth season," Fox wrote. "If this was really the beginning of a downward spiral, why did the show stay on the air for six more seasons and shoot an additional 164 episodes? Why did we rank among the Top 25 in five of those six seasons?"

Fox is still surprised by the phrase's staying power. "It is unfathomable to me that the shark still has its bite. But so does our show."
http://www.tvguide.com/JumpTheShark/Happy-Days-Writer-1022609.aspx