Shaving a few ounces off its weight to keep up with its ultra-light competitors resulted in a faster "feeling", albeit less stable ride. Thus RadaR was happy to remain middle of the road in the weight department.

Enter RadaR's newest creation, The Vice. Running the same proven rocker-line and bevel configuration as the Strada, The Vice mellows out the feel one step further by running a polyurethane core,  opposed to the Strada's PVC core material. The result is a damper, more predictable flow through the turn's completion, with no loss of cross-course speed. The Vice starts with a polyurethane block that is then machined to exact specifications before entering the mold. You are left with the tightest-tolerance poly-core ski on the market.

Some Video from 2010 European Championships

The Wilson Bros.-Brooks and K.C. Wilson on the Waterski Couch

PUTRAJAYA: The Water Sports Complex in Presint 6 will host the final round of the Malaysian Waterski and Wakeboard Championships on Nov 12-14.

The exciting weekend of waterski and wakeboard competitions for all ages are organised by the Malaysian Waterski and Wakeboard Federation.

More than eight countries, including Malaysia, have confirmed participation in the grand finale of the 2010 waterski and wakeboard season.

More than 30 foreign top-level and age-group competitors will join 30 Malaysians in a contest for medals in 16 categories which will see spectacular action in slalom, jump, shortboard (tricks) and wakeboard for men and women.

Connie Morris can't walk on water, but that's about the only thing she can't do.

She's mastered just about everything else.

She can slalom ski, trick ski and ski jump, and she's one of the best in the world at all three in her age group.

As a two-time national champion, she earned a spot on the USA waterski team that competed at the 35-and-over World Championships outside of Milan, Italy.

Even though she had to pay her own way, there was no way she wouldn't go.

"No. I mean how often do you get a chance to be on the U.S. team in a world tournament?" Morris says. "It was pretty exciting."

Connie won four medals in Italy: a bronze in trick, a silver in jump, and a silver in overall. But her favorite medal was the gold won by Team USA.

"The team had to win," Morris says. "That was the only thing that really mattered."

Morris lives in Scripps Ranch and works as an engineer for SDGE, but she does most of her skiing at Imperial Lakes,CA with her husband and two teenage children.

The 47 year-old skied competitively in college at SDSU and since then, has steadily improved.

The purpose of this entry is threefold.
For starters, I’d like to formally introduce myself and preface my contributions with the rationale behind them. I’m stealing some of my material below from the “Who are We” thread from a few weeks back. I wrote it, so I can do that. Sorry to anyone reading it twice. (If you don’t know what I am talking about, please bookmark this and visit daily….no, of course HR doesn’t monitor your browser activity...)
Secondly, I’d like to provide anyone so kindly reading my rambles with a frame of reference that hopefully gives my perspective some credibility …or at least explains it.

Lastly, I’d like nothing I say to be taken too seriously. Realize all content with my name in the byline is coming from a girl who enjoys pretending to be far more intelligent than she is and is not a direct reflection of Ball of Spray or any of its affiliates. (This blog will be archived so consider this the official, over-arching “don’t sue/blame/hunt Horton” statement.)

During my recent trip to Europe, I met separately with Volker Engelhardt  the owner of Razor and Alex Munninger the owner of Sans Rival. These two men have different personalities, but they do share a few key attributes.  Each man is clearly convinced that their ski design and manufacturing is superior to any other ski on earth.  More than anything, these two men share a profound enthusiasm for water skiing and building water skis.

Chico State student-athlete Andrea Neely recently captured the Division II women's individual all-around title at the National Collegiate Water Ski Association National Championships held in Buda, Texas, on Oct. 14-16.
Holding a ranking as a professional water skier since 2007, Neely won the women's slalom event and placed second in the women's jump and sixth in the women's tricks events. In total, she tallied 1,060 points from the three events, which edged out her nearest competitor by 20 points.

Nautique and the promoters of the Latin America Senior Tour have joined forces. The two organizations will be working together to promote water skiing and to expand opportunities for skiers to participate on an international level.

The Latin America Senior Tour will be pulled exclusively by the world record breaking Ski Nautique 200. The tour will consist of five stops; the first one will be held this weekend, October 30-31 at Miami Nautique International followed by a stop in Chile on November 20-21, Peru on January 29-30, Argentina on March 12-13 and the final stop in Brazil scheduled for May 2011.

McClintock Nominated for Cambridge Athlete of the year 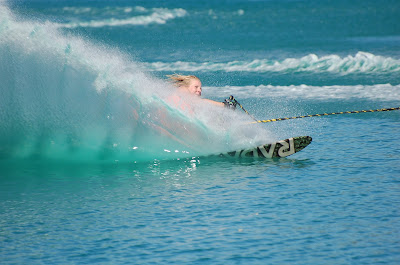 The Cambridge Sports Awards committee announced the list of nominees for the Tim Turow Award for Athlete of the Year and three winners of other awards.

Feliciano and Jackson won the Ontario youth open female championships in the summer and finished ninth in the senior division 2 at the national championships at Ashbridges Bay in Toronto.

Read more: McClintock Nominated for Cambridge Athlete of the year

From Jimmy's Facebook "So my "friends" thought it would be a good idea to say I broke the world record. Nic was texting every round freaked out that I was going to set the record. They felt his insecurities needed a little playing with. Sorry guys"